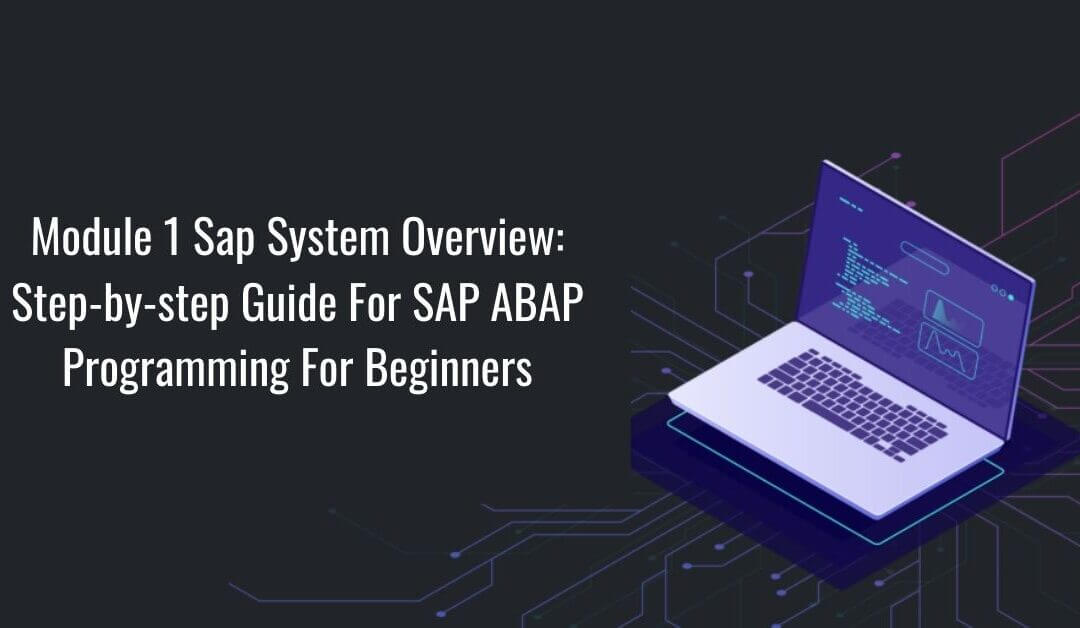 Getting started on Udemy with SAP ABAP Programming for Beginners by Peter Moxon is just a matter of a few steps. First of all, create your Udemy account by simply signing up.

Log in to your account and purchase the courses you wish to study. Once you have purchased, you have lifetime access to the on-demand videos. You can get a brief idea about what this course contains from here.

The course- SAP ABAP Programming for Beginners is a 13 hours video lecture lesson. There are a total of 13 modules and today we shall describe module 1. In this module, Peter Moxon has laid emphasis on the Basic Overview of the SAP ABAP programming.

The entire module is of 30 minutes. The module is split into 6 parts. The videos are short and to the point. Each part is described in the upcoming sections.
Click on Go to the course. And start learning!

This part takes merely 1-2 minutes. Here only a text document is provided to understand the guideline to download the SAP system on the local machines step by step and configure your own SAP trial/developer software. Important website links are provided for the same. Just a two-step process and you are ready to go!

The system overview has been lucidly explained by the instructor. It takes almost a minute to complete this section. This part consists of three categories namely high-level architecture of an SAP system, environment for programs, and running with the system.

The high-level architecture of an SAP system consists of technical architecture and platform independence. The environment for programs includes the work processes and structure of an ABAP program. The last and final category of running with the system covers the business model overview and ABAP workbench.

The technical architecture has three-tier client/server architecture whereas the landscape architecture includes development system, testing system, and production system. These three systems are platform-independent and work as a transport system.

Now let us discuss the three-tier client/server architecture in detail. It consists of three-level servers. At the top, the presentation server is present. It is an input device used to control an SAP system.

The SAP GUI can be used. Also, web browsers, mobile phones, and other forms of input devices can be used. This layer is responsible for communication with the application server.

As discussed above, landscape architecture has three types of systems. Now one may wonder why there are three systems! The answer is quite simple. Most of the development work and initial unit testing in SAP work is done on a development system.

This system ensures that none of the other systems are brought into use by any company. After the developments, tests are carried out by external sources. The developments are sent to the next system using the transport system. This next system is the testing system. If the program works fine, it’s good to go.

Otherwise, more developments and changes are made to the production system. A program or code moves into the production environment when it’s turned on and used in the business. Landscape architecture is not solely meant for development purposes. There could be several reasons to use it.

Sometimes the data quantity is huge and hence a normal production system cannot hold it. It would be difficult to use it in the development environment because generally development system and testing system are not as huge as a production system. Multiple security elements are also associated with it.

Most companies do not wish to have developers see the live production data due to security issues. In fact, the people not involved with live data should not see the live data. These three systems are minimal requirements. Besides the development system, testing system, and production system, organizations can increase to4 systems.

A training system is used to manage multiple projects at the same time. There may be two different development systems, two different test systems, maybe a consolidation system before passing to the production environment. All these factors are dependent upon the company executing the operations.

One commonality between these systems is that it has its own application server and database server. This makes the three systems platform-independent.

4. Environment for Our Programs

This part of the module is very interesting since it includes the working and processing of the SAP system. The environment for programs has two aspects, PROGRAMS, and WORK PROCESSES. There are two types of programs namely Reports and Dynpros.

The report is a program that generates a list of data or represents interactivity in them but mostly supplies data to the front and databases. On running a report program, the user gets a selection screen. On choosing the parameters and executing the report program, the output is displayed.

Dynpros is a different and dynamic program. It allows the user to intervene during the execution of the program and they process a series of screens called dialogue screens. The user is enabled to determine the program flow by choosing buttons or fields to interact with on the screen.

The action of users leads to different functions that have been coded within the program. During report generation, several interfaces are generated that clusters dim pros for all selection criteria. Most of the work in ABAP is actually inside report programs.

These programs don’t always generate outputs even though they are classified as reports. Reports process all the logic, reading, and writing to the database.

Every program that runs an NSAP system runs on Work processors which actually run on the application server. Work processes work independently of the operating system and the database it interacts with.

The dispatcher optimizes things so that the same work processes receive the sequential dialogue steps of an application.
The dispatcher has three important elements. The Dynpro processor, ABAP processor, and the database interface.

The Dynpro Programs have flow and processes logic. The job is to handle the actual flow logically and respond to the user’s interaction and control the further flow of the program. Depending on the user interaction, it’s a responsibility for dialogue control in the screen. However, it cannot perform calculations. It simply manages the flow of program logic.

One can use the same ABAP statements on a Microsoft sequel server or an Oracle database that is actually called open SQL to control database reading and writing over the database interface. It has a great benefit.

The ABAP statements have encapsulation which means that programmers do not need to know which physical database system is the actual SAP system that they are using actually supports.

At times the programmers do want to use a specific SQL statement that is native to the database that is installed. So SAP has designed ABAP in a way that facilitates such type of coding when necessary.

It is easy to directly access the database through programs using native SQL statements. However, it is not encouraged to do so. For programming in ABAP, open SQL should be used. The system administrator forbids this practice due to the risks to the systems that the program may introduce.

5. First Look at The ABAP Workbench

This part of the module talks about working on the SAP system by opening up the ABAP workbench. ABAP programs are normally structured into two parts.

The first part is called the Declaration section where we define the data types, structures, tables, work area variables, and the individual feels that we want to use inside our program. The global variables are also declared here which are available throughout the individual subsections of the program.

When our ABAP program is created, there is a choice to declare variables that are only valid inside specific sections within the programs. These sections are called internal Processing blocks. The declaration part of the program is where the parameters are defined and used for selection screens for reports.

Open that workbench from the four different options that are visible on the screen. The first thing we want to look at here is a quick overview of how we can run a transaction in the SAP.

There are two ways, first open up the menu and when you have an item that did not look like a folder is an actual transaction you can run. Run the object navigator or double-click and down at the bottom of the screen, it starts the translation.

A little tip so that the beginners are familiar with all the different SAP transactions is that go to settings and the dialogue box that comes has four options in it. Choose the last option that says display technical names.

Click the little continue icon with the green tick and now refresh the menu. Now when you navigate inside, to the overview menu you could see the actual transaction codes that you start working within the SAP system.

By frequent use of the transaction codes, ABAP programmers can use them in the SAP system. After a brief through the overview section, let’s move to the different options available step-by-step. The 4 to 5 major pieces of the ABAP workbench are highlighted below that are necessary to be familiar with as an ABAP developer.

\One most common element in the program is reading and writing data to and from the database tables within the SAP system. The ABAP workbench has a transaction to allow the users to create database tables and view the fields that make up the tables and browse the data inside them. It is called as ABAP dictionary.

It is here where the users create the codes and build the logic. By using forward navigation which is a function of the SAP system, one can define functional modules. That transaction code SE38 is assigned for the ABAP editor. The third important part of the workbench is the function builder.

It is very similar to the ABAB editor but the main function is to define a specific task that can be called from any other program. It allows the user to create interfaces in the function builder where the different data elements are defined and different types of tables that can be passed to and from the actual function that we build.

This is a tool that is used to generate buttons, icons, and menu bars. For example, the log-off button is available on the menu bar and it can be triggered by using the shift and F3 key together.

The screen painter with a transaction code of SE51 Allows the user to define the user input screen. It defines text boxes, drop-down menus, list boxes, and input fields, time to areas of the screen, and so on. It helps in defining the whole interface that the user shall use.

You can also define the individual functions that get called when the user interacts with it. The last and most crucial item is the object navigator. It is an amazing tool that brings all the tools together. It provides an efficient environment for the developer to program effectively.

Overall, the main features of the ABAP workbench have been covered that will be used during the entire course. There are many other transactions that can be used by a developer in the program given in the menu list on the left.

The ones stated above are crucial for 90 to 95% of the development tools that will be used. That’s all in this introduction to the SAP development environment module.

6. How to Obtain Your Course Certificate of Completion

In order to obtain the certificate, a few steps have to be followed. The details of which are provided in the PDF available for download.

The user must view all the lectures before unlocking the certificate. Once all the topics are covered such as lectures and quizzes, the certificate would be successfully unlocked.

The user must view all the lectures before unlocking the certificate. Once all the topics are covered such as lectures and quizzes, the certificate would be successfully unlocked.

That’s all in module 1- SAP System Overview on SAP ABAP programming for beginners. Hope you enjoyed the lessons.